Along with Brad Taylor’s duo of Pike Logan and Jennifer Cahill, Josh’s Mason Kane and Renee Hart are another duo that I have fallen in love. In this case, I think I’m more in love with Renee than Mason!! This is the second book in the Search And Destroy series, and I cannot wait to see where Josh brings these characters and this series.

In the second book of the explosive Search and Destroy thriller series, Mason Kane—a special ops hero with a questionable past, joins forces with the CIA to neutralize a radical off shoot of ISIS and unravel a conspiracy emanating from the White House’s inner sanctum.

After almost losing his life, foiling a terror plot that threated to draw the United States into another war—Mason Kane, disgraced American soldier, and special operations legend is still on the governments blacklist. To finally clear his name, Mason strikes a deal with the CIA—throwing himself back into the deadly world of black ops.

But when an asset tied to ISIS leads an old friend into a trap, Mason goes off the grid, and finds himself trapped in the middle of a plot involving an extremely violent and highly capable terror cell—with ties to the President’s inner circle. With the help of Renee Hart, a DOD operative, and a team of elite special ops soldiers, Mason is determined to stop an attack aimed at crippling the US military before time runs out.

Check out my Thursday Reads for “Warning Order” here

Pike Logan is definitely among the top of my favorite characters, as well as Jennifer Cahill. And one of my top duos. I love their relationship. I love how Brad has written such a strong female character who is becoming such a badass!!

The Taskforce has stopped countless terrorist threats across the globe, operating outside of US law to prevent the death of innocents. But now, along the fault lines of the old Iron Curtain, the danger is far greater than a single attack. With Russia expanding its influence from Syria to the Baltic States, the Taskforce is placed on stand-down because of the actions of one rogue operator.

Meanwhile, Pike Logan and Jennifer Cahill travel to Poland, hired to verify artifacts hidden for decades in a fabled Nazi gold train, only to find themselves caught amid growing tensions between East and West. A Russian incursion into Belarus under the facade of self-defense is trumped by a horrific attack against the United States, driving NATO to mobilize even as it tries to determine who is behind the strike.

On the brink of war, Pike and Jennifer discover that there is a separate agenda in play, one determined to force a showdown between NATO and Russia.  With time running out, and America demanding vengeance, Pike and Jennifer race to unravel the mystery before a point of no return is reached. Unbeknownst to them, there is another attack on the way.

One that will guarantee World War III. 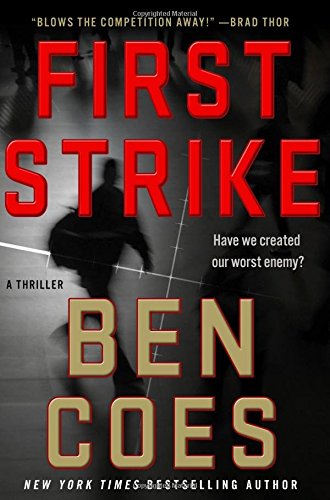 Deep within the Pentagon, a covert, multi-billion arms-for-influence program was created. The objective was to protect the United States and its allies from terrorist acts by secretly enabling a hand-picked man to emerge as the most powerful leader in the Middle East. But the charismatic Tristan Nazir double-crosses America, twisting the program for his own violent ends to create ISIS. Now America is at great risk.

Elite operative Dewey Andreas is sent to Syria to retrieve details about the source of ISIS’s funding but his cover is blown mid-operation and chaos erupts in the streets of Damascus. Trapped and outnumbered, Dewey manages to send proof of the awful truth―unknown at even the highest levels in the government―that ISIS’s munitions were indeed provided by America itself.

This information arrives in time to for the U.S. to cut off a final arms shipment before it reaches ISIS. But the vicious Nazir, is far from finished. He launches a bold strike into the heart of America, sending a terrorist cell to take over a dorm at Columbia University, capturing hundreds of college students as hostages. For every hour that the shipment of weapons is withheld, the terrorists will publicly execute one student. The potential loss of life is intolerable. A frontal assault is impossible. Releasing the shipment is unthinkable. There is nowhere to turn…

In a situation with no solutions, there remains only one option―Dewey Andreas.

It’s been 3 years now and Vince Flynn is still greatly missed. And for many, myself included, it feels like it was just yesterday. Hard to believe. I remember the exact moment I found out: It was right before lunch time and I checked my phone, received an email from my Mom stating that Vince had passed away earlier that morning. I sat down, shocked at the news. I scarfed some lunch down, while trying to send a tweet in which the wifi wasn’t being very cooperative. I got something out, as I recall, it wasn’t the most eloquent, but it served a purpose. I then finished up what work was left to do, and I headed home early due to a slow afternoon. I got to my car, and cried. I cried the entire drive home. I cried that night. I cried for a few days. And in those times, when my mind would wander to the “Mitch Rapp is dead too” I would stop myself allowing a selfish thought and refocus on the real issue, those who lost a husband, a father, a son, a brother, an uncle, a cousin, a friend, etc. Vince’s passing hit me hard (like many other fans), I mourned just as though I lost a family member. In a way, even though I only talked to him once in my life, he felt like family due to me running VFF. I wasn’t just a fan, but I felt like a part of the team. My only real regret in life, is that I didn’t pick up a Vince Flynn book a lot sooner!

Life keeps moving on. We’ve lost many others since then. But, they all live on and remain in our hearts.

And some continue to live on through their crafts. What a wonderful thing that is, isn’t it? Vince lives on through his books. With Kyle Mills continuing the Mitch Rapp series, it gives more people the chance to discover the world of Rapp and Flynn. Thus, The Rapp Pack continues to grow and strengthen every day.

So while today is the anniversary of Vince Flynn’s death, which is sad, let’s be happy and thankful that Vince Flynn happened. Remember him not for this day, but …

For the joy he brought us.

For the love he shared.

For Mitch Rapp and 14 books for us to escape into.

Keep The Faith! my friends.

An American president who will do anything to win reelection. . .An Iranian leader who will stop at nothing to bring about apocalypse. . .An ancient evil, only waiting to be reborn. . .

High in the Alborz Mountains of northwestern Iran, an archaeological team disappears. American citizens are among the missing. . .

With the presidential election only months away, President Roger Hancock authorizes a covert CIA mission into the mountains of Iran. Their objective: rescue the archaeologists and uncover the truth.

With fifteen years in the Clandestine Service, paramilitary operations officer Harry Nichols is unquestionably the man for the job. He’s a tough, ruthless veteran operator. He’s led his men into harm’s way time and again. For him, it’s all about the mission. It’s all about the team.

Drawn into a web of conspiracy that reaches half-way around the world and into the highest levels of the U.S. government, he soon finds that nothing is as it seems.

The mission itself is suspect. His team can no longer be trusted.  And a misstep means world war. . .

I met Stephen many years back when I started running the VFF twitter. “Pandora’s Grave” is the first of the Shadow Warriors series and where we meet Harry Nichols. It’s a thrilling ride and I highly recommend it.

And lucky for you, there are 2 more novels in the Shadow Warriors series, “Day of Reckoning” and the newly released “Embrace the Fire”!!!

Scot Harvath has exactly the skills the CIA is looking for. He’s a former U.S. Navy SEAL with extensive experience in espionage. Working for a private intelligence company, he will provide the CIA, and more important, the President, with absolute deniability.

But deep within the Russian Caucasus, Moscow also has its own special kind of operative. As a child, Sacha Baseyev endured an unimaginable horror. Today, he lives and breathes for only one reason—to kill. And he will kill as many Americans as it takes to accomplish his mission.

When a clandestine American operations team is ambushed near Syria, all signs point toward a dangerous informant in Brussels. But as Harvath searches for the man, he uncovers another actor—a rogue player hell-bent on forcing America’s hand and drawing it into a confrontation deadlier than anyone could have imagined.

As the attacks mount, and terror is brought to the very doorstep of the White House, Harvath finds himself in the race of his life. From Vienna, Brussels, and Berlin, to Malta, Jordan, and Syria—he will push himself beyond the edge in order to confront one of the greatest evils the world has ever known.

“I think everybody’s weird. We should all celebrate our individuality and not be embarrassed or ashamed of it.” – Johnny Depp

“Just keep moving forward and don’t give a shit about what anybody thinks. Do what you have to do, for you.” – Johnny Depp

There is only one you. There will only ever be one you. So make your mark on the world and show her what you got.

When Hazel Nash was six years old, her father taught her: mysteries need to be solved. He should know. Hazel’s father is Jack Nash, the host of America’s favorite conspiracy TV show, The House of Secrets.
Even as a child, she loved hearing her dad’s tall tales, especially the one about a leather book belonging to Benedict Arnold that was hidden in a corpse.
Now, years later, Hazel wakes up in the hospital and remembers nothing, not even her own name. She’s told she’s been in a car accident that killed her father and injured her brother. But she can’t remember any of it, because of her own traumatic brain injury. Then a man from the FBI shows up, asking questions about her dad-and about his connection to the corpse of a man found with an object stuffed into his chest: a priceless book that belonged to Benedict Arnold.
Back at her house, Hazel finds guns that she doesn’t remember owning. On her forehead, she sees scars from fights she can’t recall. Most important, the more Hazel digs, the less she likes the person she seems to have been.
Trying to put together the puzzle pieces of her past and present, Hazel Nash needs to figure out who killed this man-and how the book wound up in his chest. The answer will tell her the truth about her father, what he was really doing for the government-and who Hazel really is. Mysteries need to be solved. Especially the ones about yourself.
Purchase “House of Secrets” on Amazon here
Follow Stacy Reller on WordPress.com