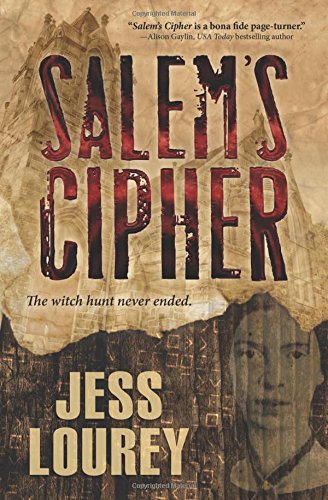 To start, I just want to say, that Jess is one of my favorite authors (in my top three, top two actually, ok ok, she’s my second favorite author) and I’ve been waiting for her new book for months!

Salem Wiley is a genius cryptanalyst, courted by the world’s top security agencies ever since making a breakthrough discovery in her field of quantum computing. She’s also an agoraphobe, shackled to a narrow routine by her fear of public places. When her mother’s disappearance is linked to a plot to assassinate the country’s first viable female presidential candidate, Salem finds herself both target and detective in a modern-day witch hunt. Drawn into a labyrinth of messages encrypted by Emily Dickinson and centuries-old codes tucked inside the Beale Cipher, Salem begins to uncover the truth: an ancient and ruthless group is hell-bent on ruling the world, and only a select group of women stands in its way.

Be sure to check out my 3rd all-time favorite series, Jess’s Murder-By-Month series