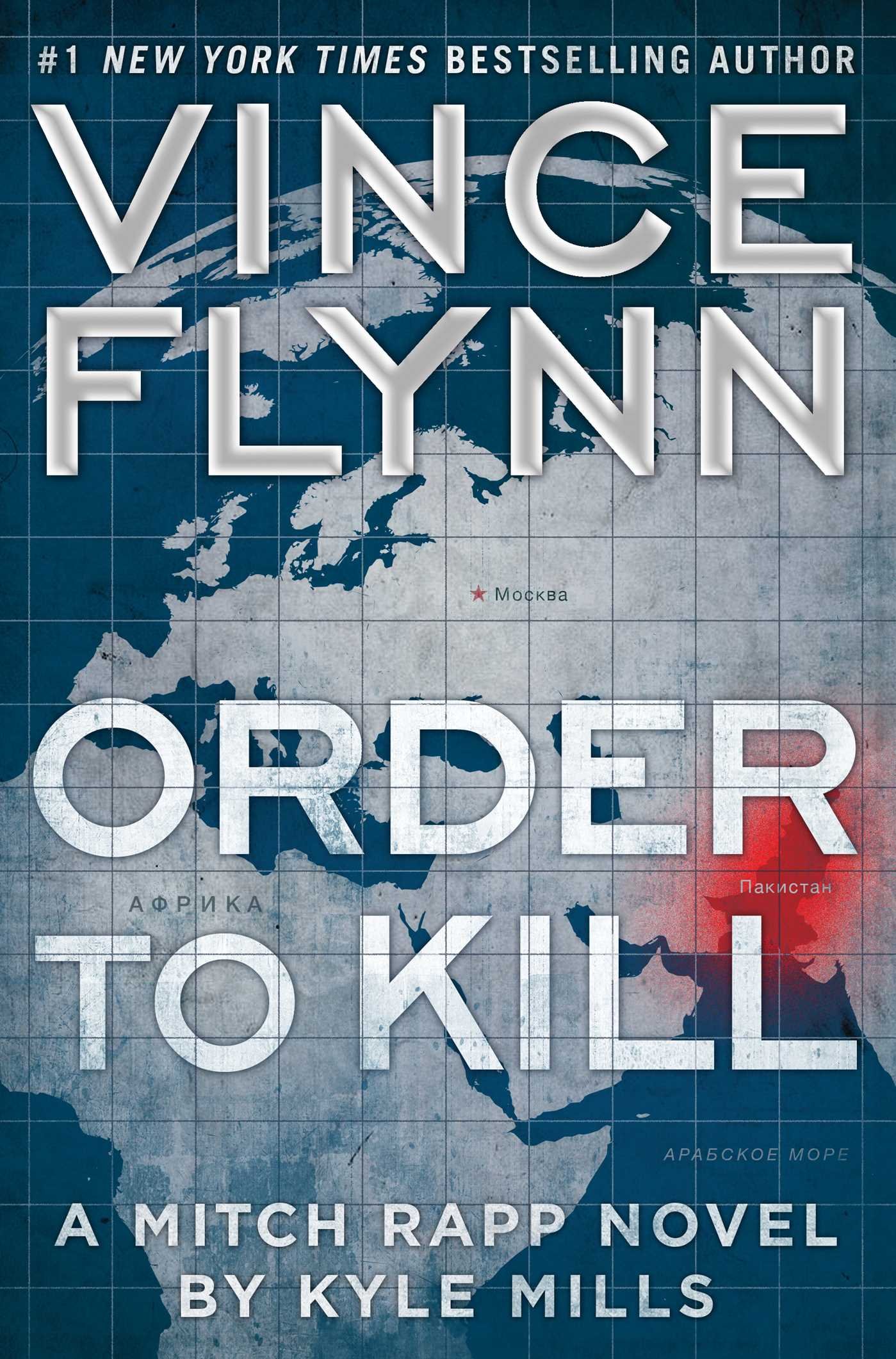 Order to Kill is the next installment of Vince Flynn’s Mitch Rapp series.

In the next thrilling novel in the #1 New York Times bestselling Mitch Rapp series, the anti-terrorism operative heads to Pakistan to confront a mortal threat he may not be prepared for. In fact, this time he might have met his match.

Mitch Rapp is used to winning.

But in this follow-up to #1 New York Times bestselling The Survivor, the CIA operative finds himself chasing false leads from continent to continent in an effort to keep Pakistani nukes from falling into the hands of terrorists. Together with friend and colleague Scott Coleman, Rapp struggles to prevent the loss of these lethal weapons, particularly because Russia is also interested in the nukes, though not for the same reason as Rapp and Coleman.

Soon, it becomes alarmingly clear that the forces in Moscow are bent on fomenting even more chaos and turmoil in the Middle East, and Rapp must go deep into Russian territory, posing as an American ISIS recruit. There, he uncovers a plan much more dangerous and insidious than he ever expected, one that could have far-reaching and catastrophic consequences.

Written with breathless tension and heart-pounding action, Mitch Rapp’s latest adventure is as timely and provocative as ever.

Kyle Mills has done it again, and continues Vince’s legacy with another astounding Mitch Rapp novel. We (the fans) have truly been blessed with Mills, as he was the author that was selected to continue the series. He nailed Vince’s voice in The Survivor, and with Order to Kill, he has taken the series into his own hands and has made it his own, all the while staying true to Vince’s legacy.

Connect with thousands of fellow fans on Twitter: @VinceFlynnFans and @MitchRappFans

MITCH RAPP IS BACK!

Scot Harvath has exactly the skills the CIA is looking for. He’s a former U.S. Navy SEAL with extensive experience in espionage. Working for a private intelligence company, he will provide the CIA, and more important, the President, with absolute deniability.

But deep within the Russian Caucasus, Moscow also has its own special kind of operative. As a child, Sacha Baseyev endured an unimaginable horror. Today, he lives and breathes for only one reason—to kill. And he will kill as many Americans as it takes to accomplish his mission.

When a clandestine American operations team is ambushed near Syria, all signs point toward a dangerous informant in Brussels. But as Harvath searches for the man, he uncovers another actor—a rogue player hell-bent on forcing America’s hand and drawing it into a confrontation deadlier than anyone could have imagined.

As the attacks mount, and terror is brought to the very doorstep of the White House, Harvath finds himself in the race of his life. From Vienna, Brussels, and Berlin, to Malta, Jordan, and Syria—he will push himself beyond the edge in order to confront one of the greatest evils the world has ever known.

“One Rough Man” by Brad Taylor

My friend Ryan over at The Real Book Spy asked me to do a Throwback Thursday Review for his website, in which I gladly accepted. My choice was Brad Taylor’s “One Rough Man” and it actually took me quite some time to do since I wanted to do it in the format than Ryan uses and not just copy and paste the book’s blurb. Like I’ve said before, I’m not big on writing reviews because the words that I want to express don’t come to me. I gave it a whirl. And it came out pretty good. I sure hope it did the book justice because it is a fantastic thriller!

If you’d like to, you can check out my Throwback Thursday Review here

“One Rough Man” is the first in the Pike Logan series. And of course it is one of my favorites (the first ones always tend to be). I love Pike Logan, but I just might love Jennifer Cahill more. Even though she isn’t in Pike’s league, she proves that she can hold her own. Another reason for the love of this book, there’s a little archaeology happening (hello Indiana Jones – well, not really, but it’s fun). If you are a Flynn/Thor fan, and haven’t read Taylor yet, you need to!! And he’s not only a great author, he’s a really great person 🙂

They call it the Taskforce. Their existence is as essential as it is illegal. Commissioned at the highest level of the U.S. government. Protected from the prying eyes of Congress and the media. Built around the top operators from across the clandestine, intelligence, and special forces landscape. Designed to operate outside the bounds of U.S. law. Trained to exist on the ragged edge of human capability.

Pike Logan was the most successful operator on the Taskforce, his instincts and talents unrivaled-until personal tragedy permanently altered his outlook on the world. Pike knows what the rest of the country might not want to admit: The real threat isn’t from any nation, any government, any terrorist group. The real threat is one or two men, controlled by ideology, operating independently, in possession of a powerful weapon.

Buried in a stack of intercepted chatter is evidence of two such men. The transcripts are scheduled for analysis in three months. The attack is mere days away. It is their bad luck that they’re about to cross paths with Pike Logan. And Pike Logan has nothing left to lose.

This book is among the top of my all-time favorite books and is my favorite Vince Flynn novel. I was introduced to the world of Vince Flynn and Mitch Rapp around the time that “American Assassin” came out. (It is a weird situation for me, because I was a fan, even though I hadn’t read any of his novels. I went to one of his signings and the rest is history.) I picked up “Term Limits” and read it and was blown away! Even though Rapp ins’t in this one, it is in the Rapp Universe. I quickly made my way through the series before Kill Shot came out the following year. Since then, TL is my favorite VF book hands down. It could partly be because it was the first book I read by him (which tends to be how things go for me). But, it’s #1.

Prior to this, I had never read any political thriller. My world consisted of YA, the “Murder, She Wrote series,” and popular titles at the time. It totally flipped my world upside down and I have found a love for other political thriller authors (Brad Thor & Brad Taylor, and many others). (Running @VinceFlynnFans on twitter has helped with this due to recommendations by fellow assets)

In one bloody night, three of Washington’s most powerful politicians are executed with surgical precision. Their assassins then deliver a shocking ultimatum to the American government: set aside partisan politics and restore power to the people. No one, they warn, is out of their reach—not even the president. A joint FBI-CIA task force reveals the killers are elite military commandos, but no one knows exactly who they are or when they will strike next. Only Michael O’Rourke, a former US Marine and freshman congressman, holds a clue to the violence: a haunting incident in his own past with explosive implications for his country’s future…

Even though this book came out in 1997, it is still very relevant to today’s world. It’s sometimes hard to just categorize Flynn’s books as fiction, they are more like faction (a mix of ‘fact and fiction’).

I highly recommend any Vince Flynn book. And while Vince is no longer with us, Kyle Mills has currently taken over the series, making it his own, but staying very true to VF and his characters.

Today, I have a book recommendation for you.

If you are a fan of the political/military thriller genre and like authors such as Vince Flynn, Brad Thor, Brad Taylor, etc, then you need to check out Joshua Hood’s debut thriller Clear by Fire! And if you’re a fan of any of the previously mentioned authors, you will certainly like this one.

Now, as you already know, I don’t really do book reviews, and I did break my rule of this and did post a review on Amazon for this book. My friend Ryan (THE RAPPOLOGIST!!!) is working with Josh and really helped spread the work of his book release. And Josh is also one of the Rapp Pack too!

Clear by Fire took me just over a week to finish, but I could have read it in a day or two. It is hard for me to believe that this is the first novel written by Josh, because it is that good. Very well written. Fast paced. It’s just awesome. When I wasn’t reading, I kept thinking about it. Mason Kane is a bad ass. Kane is right up there with Flynn’s Rapp, Thor’s Harvath, and Taylor’s Logan. And Kane’s counterpart Renee Hart, I definitely wouldn’t want to get on her bad side. She is a very strong female character who can and does hold her own. I love her.

I didn’t like this book. I LOVED this book. Josh is going to be a strong contender in this genre. (There is room for everyone!)

A little about Josh:

Joshua Hood graduated from the University of Memphis before joining the military and spending five years in the 82nd Airborne Division, where he was team leader in the 3-504 Parachute Infantry Regiment. In 2005, he was sent to Iraq and conducted combat operations in support of Operation Iraqi Freedom from 2005-2006, and from 2007 to 2008 he served as a squad leader in the 1-508th Parachute Infantry Regiment and was deployed to Afghanistan for Operation Enduring Freedom. Hood was decorated for valor in Operation Furious Pursuit. He is currently a member of a full time SWAT team in Memphis, Tennessee, and has conducted countless stateside operations with the FBI, ATF, DEA, Secret Service, and US Marshals.

I’ve had the chance to interact with Josh on social media, and he is a fantastic person. Very humble.

You can interact with Josh:

Tell him I sent ya 🙂

#TigerKing
I has cake!
I got some presents!!